The debate festival Talk Town took place in the Grey Meatpacking District from May 18th-20th, 2016. They spoke of gender, equality, and feminism, and the festival ended with a big party on Friday night, where Kapow Collective and Copenhagen Roller Derby put feminism on roller skates and thereby put the gender-segregated sport life up for debate. With more than 75 events Talk Town became the People’s Meeting for the feminism with debates on everything from transgender rights, African feminism, sexism and gender based violence, equal pay, men’s reproductive options to erotic podcasts and feministic quiz. And all that with a big and diverse audience.
Talk Town was held in connection with Women Deliver, and the festival is a collaboration between the Women’s Council in Denmark and the cultural production collective Indgreb.

For more information about Talk Town, visit en.talktown.dk or www.facebook.com/talktowncph 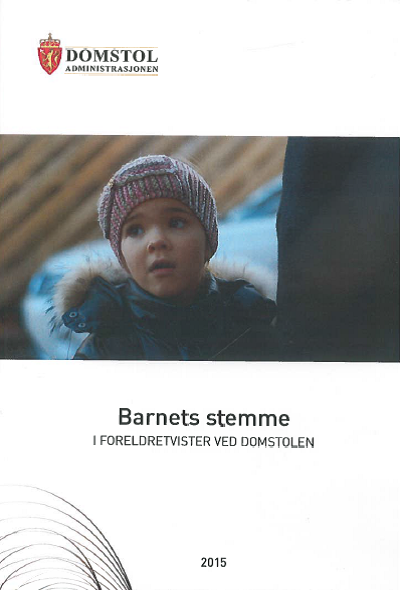 The Child’s Voice (Norwegian, 2015)
In Parent Disputes in Court

The child’s right to participation is regulated in the Children Act §31 and in the Convention Article 12. The Children Act is designed to give the child the right to receive information and to express its views in connection with any court decisions regarding its personal circumstances of the filled seven years. Children under the age seven who are able to form views will also be informed and heard. This puts increased focus on the importance of views of the child appearing in a way that is both legal and child academically sound. Interests of the child shall always be essential for the implementation of parental dispute, also during the conversation with the child.

The film’s target audience are judges, lawyers and experts. The intended learning outcome is to create an understanding of the fact that the conversation with your child is important for the elucidation, and that those who speak with children in parental disputes will raise their skills and achieve greater confidence in the role.

Accompanying the film is a booklet with various topics for reflection and discussion related to the processing of parent disputes.

The report on Nordic Tour 2014 contains information about the tour, experience collections and recommendations. It exists in Danish as well as English and will soon be sent to the relevant organisations and authorities, including UN Women.

The report can be read here: Nordic Tour 2014 report.

“The child’s best interest” is a central concept in family law, and the interpretation of the principle can have wideranging consequences.

Trude Haugli writes in the book “Convention on the Rights of the Child, Children’s Rights in Norway” from Universitetsforlaget 2012, 2nd edition by Njål Høstmælingen, Elin Saga Kjørholt and Kirsten Sandberg (eds.):

“Even though it is extraordinary that almost all of the nations of the world support the child’s best interest as a fundamental consideration regarding all actions that concern children, the principle has also received criticism.
A central question is whether the fundamental need for the principle disappears when the Convention recognises children’s rights, not just their interests.
END_OF_DOCUMENT_TOKEN_TO_BE_REPLACED

Conflict Resolution, Knots and Artwork in the Nordic Countries.

Nordic Tour 2014 starts this evening at a meeting in Denmark. The three activists and professionals travel the Nordic Countries during the next 10 days.

They say: “We are following up on the Nordic Forum, Malmø, Sweden in the summer 2014 where the head of UN Women – the relatively new Womens’ section for equality and empowerment for women, Phumzile Mlambo-Ngcuka said:

‘The Nordic countries have to eliminate violence against women and prove to the rest of the world that this can be done.’”

She is backed up by the head of the Nordic section, Asger Ryhl.

The group behind the Nordic tour initiative is Barnets Tarv NU that has advocated for a new Act concerning custody, residence and visitation in Denmark.

They want to gather experiences in the Nordic countries to see if the UN’s ambition in this field can be accomplished.

Denmark was severely criticized in an EU fact-finding paper this year.

Now when the Istanbul convention – the Council of Europe Convention on preventing and combating violence against women and domestic violence – has entered into force from the 1st of August, the Danish state has to take action.

The Bar and Law Society has stated that they have no resources to look into the matter for the time being.

The Nordic Tour 2014 – “Conflict resolution, knots and artwork” (9th to the 19th of September) is about to come to an end.

Attorney and mediator Pia Deleuran (Deleuran law firm, Denmark), Associate Professor Dale Bagshaw (School of Psychology, Social Work and Social Policy, University of South Australia), and photographer and artist Sisse Jarner, Denmark, have toured most of the Nordic countries to investigate custody and visitation issues in the family law field in each country. They report that:

“in all countries visited the messages were similar: that the ‘best interests’, welfare, safety and the rights of the child are often forgotten or ignored in family law matters, in particular where there are allegations of family violence (domestic violence and child abuse). Instead, the focus of decisions tends to be on the rights of parents, in particular on the rights of fathers. Since the focus of family law in each country has shifted to ‘shared parental responsibility’, many cases involving violence against children and mothers have not been adequately investigated and in some cases mothers and children have been put at risk by the decisions made. The impact of gender neutral legislation, the failure to adequately screen for and respond to violence, and the failure to acknowledge the effect of witnessing violence on children, or to adequately address attachment issues for children, urgently need further investigation. We also detected failures to provide access to fair and just court and administrative procedures. For example, in some countries we visited, the law makes it almost impossible for professionals with appropriate expertise to thoroughly investigate allegations as there is an emphasis on focusing on the future.”

Much needs to be changed for the Nordic countries to live up to the Istanbul Convention on Violence Against Women and Children, which was enforced on August 1st this year.

The three investigators will send their report in pictures and words to the Administrative Director of the UN section for the Equality and Empowerment of Women, Phumzile Mlambo-Ngcuka, and to the Nordic division, which is lead by Asger Ryhl. It is anticipated that they will develop further initiatives to ensure that policies and practices in the Nordic countries lead to zero tolerance for violence against women and children.

The full report is expected to be online within two weeks: www.nordictour2014.dk

The three investigators thank the Dreyer Foundation and the National Organisation of Women’s Shelters in Denmark – LOKK – for having made the Nordic Tour 2014 possible by offering various kinds of support.

The World Health Organization, WHO, has published a report on violence prevention showing the extent of violence and calling for greater measures to be taken to stop interpersonal violence. The WHO states that:

The Global status report on violence prevention 2014, which reflects data from 133 countries, is the first report of its kind to assess national efforts to address interpersonal violence, namely child maltreatment, youth violence, intimate partner and sexual violence, and elder abuse.

“I need you to be on the front line.”

There were more than one inspiration that lead to the Tour. One of them was the big summit ”Nordic Forum 2014 – New Actions on Women’s Rights” in Malmø.
During the summit, the leader of UN Women, Phumzile Mlambo-Ngcuka, said: “I need you to be on the front line”. UN Women was formed in July 2010 to fight for gender equality and for women’s empowerment. The formation was a historical step for the UN towards reaching the organisation’s goals on gender equality and the empowerment of women. The focus is on several factors, including:

• The elimination of discrimination against women and girls

• To achieve equality between men and women as partners and as receivers of development, human rights, humanitarian initiatives, peace and security.

With the Nordic Tour, we wished to show Phumzile Mlambo-Ngcuka that we support her efforts.

Another inspiration for Nordic Tour 2014 was Denmark’s ratification of the ”Council of Europe Convention on Preventing and Combating Violence against Women and Domestic Violence” – the Istanbul convention, which entered into force at the 1st of August 2014.

The FRA report on violence against women in Europe

A third motivating factor in starting the Tour was the newest report on violence from the European Union. It is clear from a report published in March 2014 by the European Union Agency for Fundamental Rights (FRA) that the issue of women being exposed to violence in the home, at the job, in public space and online is still a relevant issue to discuss – also in the Nordic countries. The survey shows that the policy makers have to recognize the extent of the violence that women are exposed to, and make sure that the reactions to the violence meet all the needs and rights of the female victims in reality, not just on paper.
When the report was published, Morten Kjærum, the director of the FRA, stated that:

“These survey figures simply cannot and should not be ignored. FRA’s survey shows that physical, sexual and psychological violence against women is an extensive human rights abuse in all EU Member States.”

He also said that:

You can read more on the report here.

The conflict resolution has changed and the judicial solutions in the Nordic countries needs to be supplemented, and in some instances replaced, by new and more advanced dispute resolution mechanisms – including court mediation, mediation and counseling.

Knots can be seen, since the new and diverse forms of families are gaining territory and the nuclear family is no longer the social frame. This has had the effect that the focus is on the individual’s rights and duties and not on community and solidarity. In certain instances this is a challenge that can lead to the feeling of powerlessness and desperation.

Art can provide icons for recognition and reflection. Since many of the problems mentioned above can be overwhelming and affect people personally, images are used as a help to maintain the focus on the theme as well as contribute with new dimensions. The collages that were brought on the tour gave topics that are usually controversial to discuss a visual expression, thereby relieving the conversation.

Nordic Tour 2014 was planned as an initiative that prioritised

• Sharing of knowledge on many different levels

• Idea generation from professionals, since many children suffer due to the divorces and break ups of grown-ups

• Information about the Council of Europe Convention on Preventing and Combating Violence against Women and Domestic Violence, also known as the “Istanbul convention”

The brochure deals with preventive measures which have been taken in Europe to combat male violence against women in intimate relationships. It surveys the status of prevention efforts in the EU Member States and in the candidate countries and reviews good practice models.